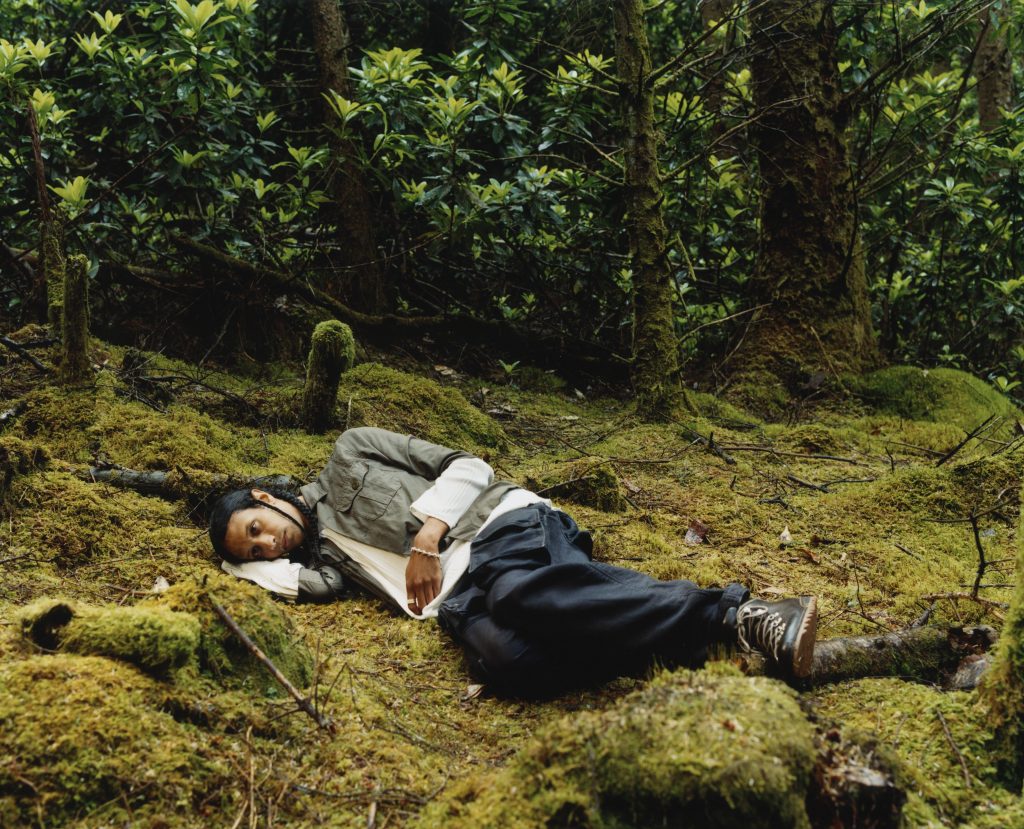 Long preferring to avoid the stage, Miink has always considered music a deeply personal affair. But fans of the singer and producer are refusing to let him stay in the studio.

“Some artists focus on making songs that get a reaction in the club. Or there’s this whole thing of having a festival crowd go absolutely nuts,” muses the tall twenty-something with the long, thin hair plaits and gleaming gold-capped teeth sitting in a West London café.

Meet Miink – one of the most intriguing new artists in Britain. A sensitive, smart and naturally contrary soul who rises at 5am every day to walk his dog, he writes and records all of his music in his bedroom and admits to not even understanding the point of performing live until rather recently.

“That’s great. But I don’t really like festivals. And I hate clubs. Some people just don’t want that type of thing,” he says. “I focus on those other times when you listen to music, when you want it to be a bit more of a personal experience.”

With streaming numbers already into the millions for tracks from his beguiling debut mixtape Small Clan, and with a growing fanbase and gig offers pouring in from all over the world – he’s just back from China – Miink is a rapidly rising artist who writes enveloping electronic pop, hip-hop and R&B compositions that he aptly characterizes as “alone music.” Lush comfort zones of sound full of starry melodies, softly throbbing beats that feel like they’ve been recorded buried under a pile of pillows, and yearning vocals sung in the sweetest of falsettos. Songs so intimate they almost make you feel like you’re intruding by listening to them.

Miink’s personal bond with music is shaped in large part by his upbringing in a huge Jamaican family in West London. Some of his first childhood memories are of his uncle, a professional musician, working in his studio at the top of his grandmother’s townhouse. “I always would hear music being made up there as I was running around,” he remembers. “I wasn’t allowed to go in. It was like game trying to get in.”

His uncle’s band was a household name worldwide selling millions of records in the 1980s, but he prefers not to be associated with them. “I don’t really feel like it has anything to do with my sound, with anything that I’m doing,” he explains. “New music should be discovered by new people who want to get into something different, not something from the past.”

‘As far as his sonics and production…..he’s the ultimate one-man band’

But Miink credits his uncle with giving him enough access to his studio to pique his interest in music making, keeping him from “doing stupid stuff” that the other neighborhood kids were.

“I don’t have many friends from my childhood left because they’re all dead or in jail to be honest,” he reveals quite bluntly. “I think I’ve used music as an escape more than anything. It’s kept me out of trouble.” As has his mother, he acknowledges. “She kept me in check,” he says laughing. “Strict Jamaican parent.”

Music could easily have remained something sealed off and secretive for Miink – literally “alone music” just for him. But a series of buzzed about self-released tracks and production work for other artists including his friend Elliott Power made his name ring out. Gigging, as already touched upon, was a concept that felt alien to Miink for a long time, as someone who has never really been comfortable among crowds and is a perfectionist about his work.

“I never really had much of a live music upbringing,” he reasons. “Now I really get it. Yeah, okay, the record is perfect, but the performance is truth. And people just want to see that honesty. They want to see that you are for real.”

Realness is everything to Miink, who is fastidious about managing every aspect of his craft, from the minor details of the way his music sounds to the look of his striking photographs and the atmosphere of his videos. He’s had talks with major record labels in the past and doesn’t rule out one day signing a deal. But for now, he prefers to remain in full control, and little wonder considering how much success he has enjoyed bringing his music to the world from the sanctuary of his own bedroom.

“You’re always pushed down certain avenues growing up,” he considers. “But I wanted to do my own thing. There’s gotta be loads of people like I was out there. Just waiting for the right thing to hit them.”