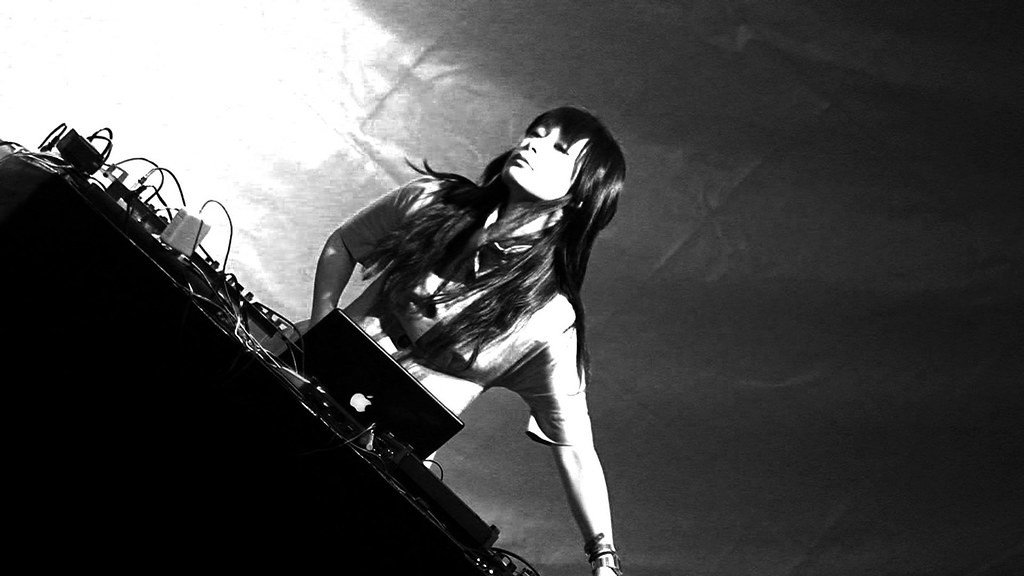 Sitting in the warmth of a Berlin café on a late October afternoon, Kyoka is in good spirits despite injuring her finger while celebrating her birthday the night before. “Evidence of a nice party,” she says.

As someone who’s already survived a decade of the German capital’s notoriously bleak winters, neither is she fazed by talk of the impending months of cold and gray. It instead leads to her first mention of color and its impact on her art: “I think my music sounds very dark gray. Maybe that’s why I ended up in Berlin.”

Although with hindsight a seemingly perfect fit, it wasn’t so obvious when Kyoka moved to Berlin from sunny Los Angeles in 2008. “A lot of my LA music friends started moving to Europe, which was really sad for me, because LA felt like a kind of paradise,” she says. A concert in Amsterdam led to a brief visit to Berlin, but first impressions were misleading. “It was a nice summer day in July and it was just beautiful. I misunderstood what Berlin was like,” she says with a laugh. “And then I moved here in February.”

She admits she had only superficial knowledge of the city’s rich musical heritage before relocating. But Kyoka says the intervening years in Berlin have made her own music even “grayer” in feel. Certainly, her throbbing, buzzier, industrial tracks would not be out of place at the city’s harder techno clubs.

But the experimental music she makes is only one aspect of her lifelong fascination with sound. “I started piano lessons when I was three, but I remember really liking the sound of concert halls and the reflection of sound after something had just finished. The echo, it felt like a ghost or something,” she explains. “I then started playing with two cassette recorders and making an echo. When it broke, I took it apart and started understanding how it worked.”

She takes the same approach to the different things she hears each day, often breaking down and categorizing sounds by frequency, density and temperature.Growing up in Kanazawa on Japan’s western coast, Kyoka distinctly remembers experiencing Japanese and Korean radio broadcasts differently.

“When I heard Japanese radio, it seemed more clear, dry and kind of cold,” she recalls. “When I heard the sounds from Korea, it had more noise, more density and warmth. I felt a difference in temperature.”

She noticed a similar linguistic difference after she moved to Germany. “One day, I realized I could not hear lower frequencies so much,” she says. “I was wondering why so I checked, and German has a lower frequency. I read that if we don’t hear those frequencies, the body thinks we don’t need them.”

For her art installations, Kyoka uses this aural sensitivity to get to the essence of a sound. She describes how she recently made something for a temple in Kyoto using field recordings: “They wanted me to use water, and I love water. I tried to make the sound, but not just hearing the sound of water, I wanted to go inside. I tried a lot of EQ and phase in order to go inside the water.”

An unusual talent able to segue with ease between a Boiler Room DJ set and cerebral museum projects, Kyoka relies on field recording for all her sonic disciplines, especially when she finds she’s struggling to be creative. “Sometimes I just record, as field recording is easy to get inspired. For example, if I was to record now, there’s already a kind of beat,” she says gesturing to a man sitting on the other side of the café tapping his foot. “There’s always something.”