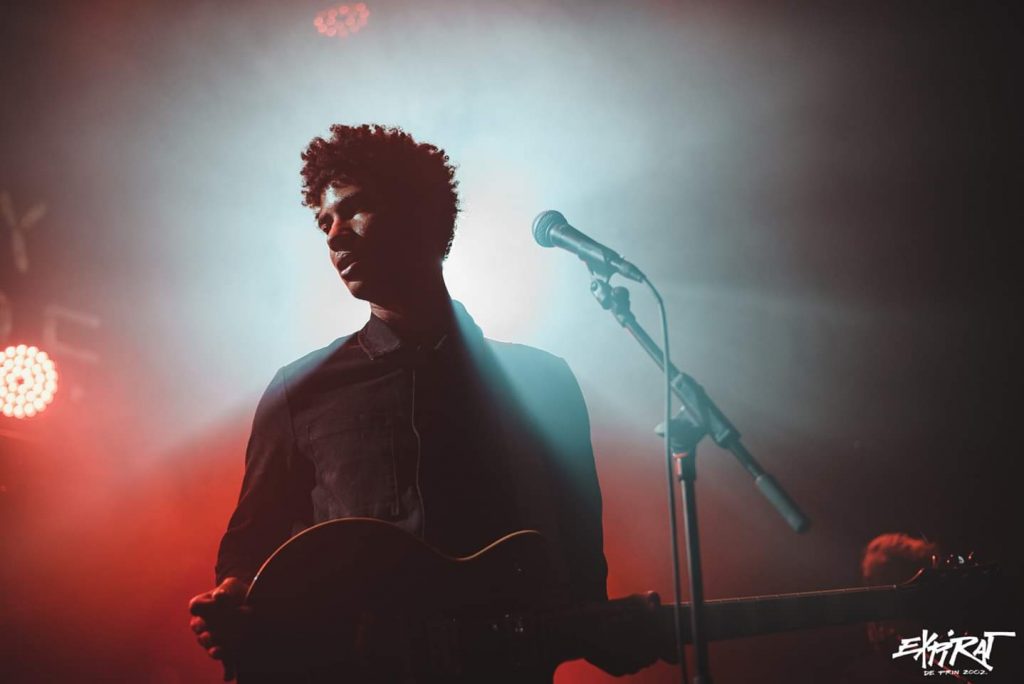 Waking Up to Skinny Pelembe

Many artists are dreamers, but Skinny Pelembe often relies on nighttime inspiration to fashion his ethereal, electronic-infused sound.

The singer, songwriter and multi-instrumentalist born in South Africa as Doya Beardmore is never troubled by writer’s block for one simple reason: whenever he runs into trouble, he just goes to bed.

“I try to write through dreams,” is how he explains his unconventional method for penning lyrics. “I’ll make the music first, and then I’ll sleep with it on. I keep a dream journal and a lot of my lyrics are basically taken directly from that. It’s like sitting in a room, watching my own thoughts.”

The best part about tapping into his deep subconscious for inspiration this way? He can literally do it lying down. “Poetic as any of this may sound,” Beardmore says with a laugh, “it’s also lazy! These thoughts are already there, eight hours a day, why not capitalize on them?”

Soft-spoken with a broad South Yorkshire accent after moving to England when he was three years old, he is sitting with a bag of vinyl records at his feet in a burger restaurant near the studios of Soho Radio. Beardmore has just finished his regular show spinning tunes on the independent online station. Signed to Gilles Peterson’s label Brownswood Recordings and championed by among others, garage rock legend Iggy Pop on his BBC Radio 6 Music show, the Doncaster-raised musician is catching the ears of some of the most influential tastemakers in the business.

A vivid, hazy collage of dubby beats, shoegaze textures and polyrhythmic guitar riffs, Skinny Pelembe’s debut album Dreaming Is Dead Now won widespread acclaim upon its release in May 2019. And with a follow-up already in the works, the future looks brighter still for the 29-year-old. But wherever it may take him, he’s determined to do things his own way.

Beardmore’s tale as a musician began with learning classical guitar as part of a high school project, leading to him meeting likeminded players, overcoming chronic shyness and forming dub-indie trio The Beaus. He gigged widely in his late his teens and early twenties, before branching off as a solo artist with a track on the 2017 Brownswood Bubblers Twelve pt.2 compilation album. He has lived in London for about five years yet hasn’t forgotten his roots in Doncaster. “It’s a town I always want to have some input into creatively,” he says.

Releasing Dreaming Is Dead Now on the Brownswood label was a dream come true for a young musician who considers label boss Peterson – also a renowned DJ, broadcaster and tireless champion of new sounds – a constant source of inspiration growing up. “He’s a hero of mine,” admits Beardmore, who first came to Peterson’s attention through his Future Bubblers program to discover, support and mentor new left-field talent.

Were his nocturnal method for writing lyrics not clever enough, Beardmore has another smartly practical system for composing music. It involves starting with a sample, building in beats and layers of instrumentation around it, and then eventually removing the sample from the final mix. “Mostly because I can’t afford to pay for it,” he admits. But also to leave a little bit of mystery at the heart of his collage-like compositions. “When you hear the song, it might not be obvious how it ended up sounding the way it does,” Beardmore elucidates. “But if you knew what the sample was, the missing piece, then it’d be obvious.”

He’s planning to take a back-to-basics approach to his next album, which is set to be recorded up in Doncaster soon. “I want to do a really simple lo-fi thing,” he reveals. “With all the little tricks that you hear in like Thom Yorke’s stuff. All of these intricacies, but without compromising just the raw, straight-to-take feel.”

When he’s not dreaming of lyrics for a new song, what kind of future does Beardmore dream of for himself as a musician? He reaches into the bag of records at his feet for a modest answer.

“When I’m Soho Radio,” Beardmore explains, referring to his unshackled DJing remit at the station, “for some strange reason they have absolutely no problem at all with me going from some kind of folky country tune into 15 minutes of ‘The Lark Ascending,’ then on to Mos Def. I’d like to be able to do sort of the same thing with my music.”

“I want to be able to throw anything I want into the mix–country, some classical, some hip-hop. Do all of those things at once,” he says smiling. “But still have a career.”